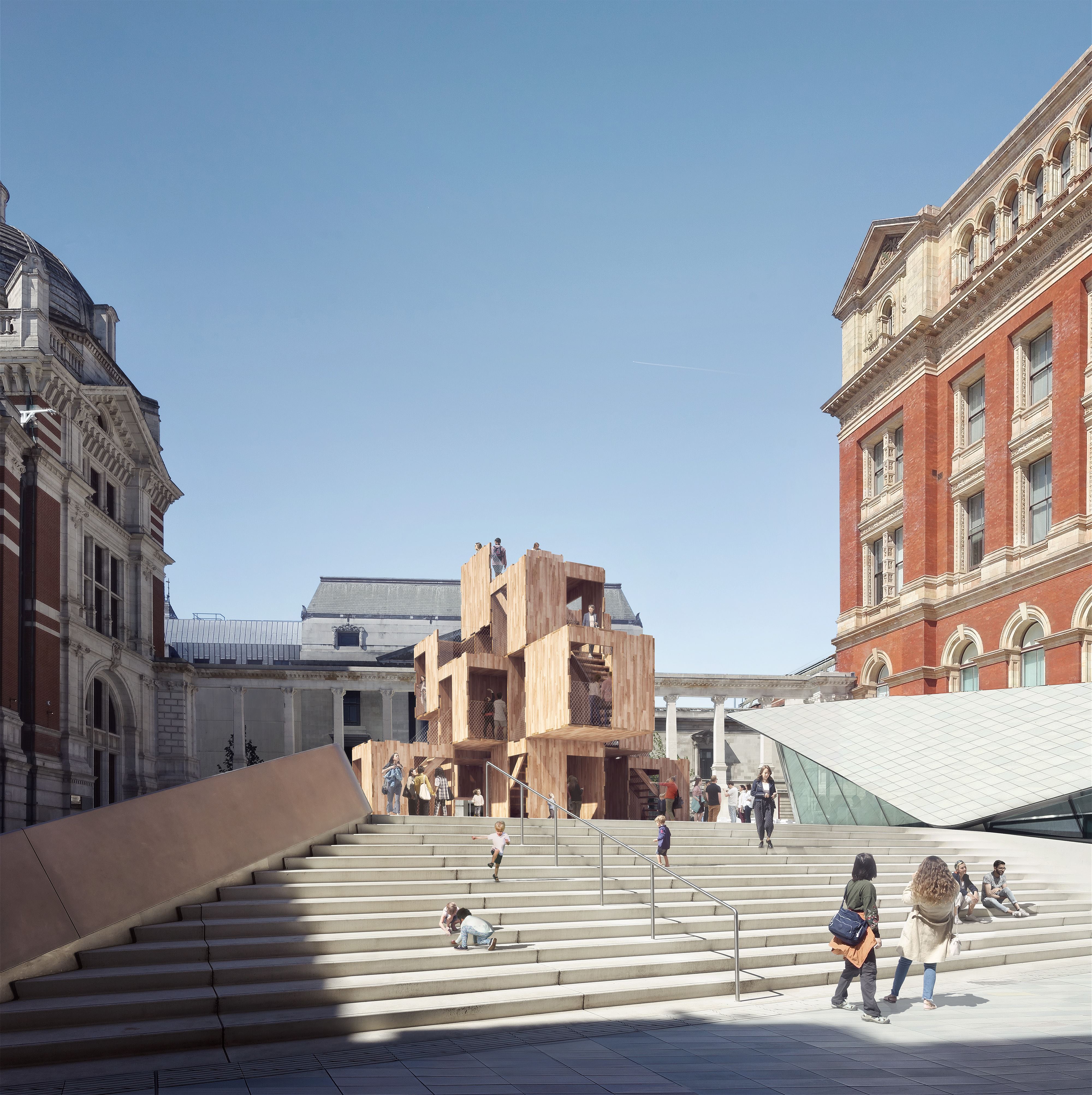 Since its first appearance on the European market in the early 1990s, cross laminated timber has been manufactured from softwoods – predominantly fir, pine and spruce, although some other conifer species have occasionally been introduced into the lamellar structure of these solid timber panels. The early development of the product arose from a desire in central Europe to find a new, high added value response to oversupply of what was perceived to be low-grade material although, in terms of structural standards, this was – and is – still of relatively high quality. The rapid growth in use of cross laminated timber throughout the world over the past decade has had two consequential effects: rising pressure on existing companies to increase capacity, matched by considerable expansion in the number of manufacturing facilities around the world for this ‘wonder’ construction product. Other, perhaps less positive, outcomes have been the impact on available forest resources and – from a construction perspective – longer lead-in times for deliveries of the CNC cutting machine-finished panels.

Another important factor in the ever-increasing popularity of this product has been the extent to which architects and engineers are conceiving taller and taller commercial and residential buildings, a recent development predicated upon the limited availability of land in dense urban environments and which is generating many conceptual projects up to 30 storeys or more, with a number of buildings of up to 20 storeys already completed or under construction. Optimally, the market for such developments is likely to steady at around the 10-storey height and certainly several recent projects in London such as the 120 residential unit, Dalston Lane project by Waugh Thistleton Architects (at present the largest CLT building in the world) would suggest this to be both land-efficient and, in construction terms, the most economically-efficient scale to work to. As timber buildings get ever higher, however, the complexity of their structural design becomes greater as does the volume of material required.

For every set of problems or challenges, there is often an equivalent series of opportunities and the idea of employing hardwoods in the manufacture of cross laminated timber has recently emerged into this landscape. Hardwood use in laminated timber systems is not entirely new – there are several companies around Europe that have been successfully making and marketing glue laminated timber (glulam) beams and columns for many years, but the principle downside of the use of hardwoods in solid laminated timber systems (as opposed to softwoods) is their sheer weight, hardwoods being generally denser than softwoods. A significant advantage of cross laminated timber manufactured from softwoods, therefore, is the size of panels that can be produced, transported and manipulated on site without the need for either high capacity cranes or large teams of skilled labour.

These characteristics have mitigated against any thought of using hardwoods in thick, large-dimension, panels until relatively recently when the American Hardwood Export Council (AHEC) in the UK began to explore the possibilities of an underused and largely undervalued forest resource – that of Tulipwood (liriodendron tulipifera), a species that grows abundantly and speedily along almost the full length of the Appalachian mountain range in the east of the United States. It constitutes around 9% of that country’s standing hardwood resource, an important factor in ensuring continuity and volume of supply to export markets. Traditionally, though, it has mainly been used domestically in the manufacture of furniture and for internal panelling and mouldings, as well as in plywood production. The critical factors that make Tulipwood suitable for cross lamination, however, are the material’s incredibly light weight, matched by its extremely high strength and its low bending, shock resistance, stiffness and compression values.

Developing the idea of cross laminated timber panels made from Tulipwood has been something of a step-by-step process, initially, in the construction of ‘Sclera’ an elliptical pavilion designed by Sir David Adjaye for the London Design Festival in 2008. The project aimed to emphasise the long, relatively knot-free, timber sections possible from this species, rather than for any particular structural innovation likely to emerge from the use of this material. Tulipwood was chosen by Sir David for this project because of its unusual colouring and only afterwards did ideas to capitalise upon Tulipwood’s anomalous (for a hardwood) low density characteristic in the production of solid laminated timber products begin to emerge.

Some five years passed before another opportunity arose – again for the London Design Festival - to take the investigation of Tulipwood to the next stage, this time in the ‘Endless Stair’, a structurally challenging installation designed by dRMM Architects and ARUP engineers. Based on the mathematically impossible images conceived by the Dutch graphic artist, M.C. Escher, the three-storey network of stairs is now widely recognised as the pioneer use of hardwood in CLT manufacture. Imolalegno in Italy fabricated the 187 CLT steps and balustrade elements; Nüssli in Switzerland put them all together to form the final structure which they erected on site in front of the Tate Modern on the South Bank of the Thames, structural testing having previously been carried out by Trento University. The resulting sculptural installation was as visually challenging is it was technically and, importantly, was the first significant public demonstration of the lamination potential of Tulipwood.

The knowledge gained from this project was taken further in ‘The Smile’, another AHEC collaboration with ARUP engineers for the London Design Festival 2016. Here the team worked with Alison Brooks Architects to develop a temporary installation to stand in the courtyard of the Chelsea College of Art that would showcase the structural and spatial potential of CLT manufactured from the Tulipwood and to capitalise upon the material’s characteristic light weight to significantly reduce the amount of fibre (mass) required to achieve the same strength performance as the equivalent softwood product. The Smile’s spectacular 3.5m high, 6m wide and 36m long, curved ‘box’ was formed from a series of panels 4.5m wide, 12m long and 100mm (five lamellae) thick, using only long, self-tapping screws to make the connections. As such, The Smile represents the first-ever use of industrial-size hardwood CLT panels, manufactured specifically of the project by Züblin in Germany.

The following year (2017) saw the completion of the first permanent building made from hardwood CLT: Maggie’s Oldham in the grounds of the Royal Oldham Hospital, a specialist cancer centre in the north of England. In this case, Tulipwood was selected by architects dRMM (who had cut their design teeth with this material on the Endless Stair) not only for its potential to deliver large format glue laminated panels but, given the function of the building, for its visual beauty and warmth. As with the Smile, the 20 five-layer panels - ranging in size from 0.5m to 12m long - were produced in Germany by Züblin. For AHEC, Maggie’s Oldham represented a milestone in almost a decade of innovative research and development into the structural potential of hardwood: the demonstration that Tulipwood CLT was capable of being manufactured on a commercial scale for use by the construction industry was now apparent for all to see.

So, to 2018 and the latest AHEC demonstration project that will be the centrepiece of this year’s London Design Festival. The project this time is even more ambitious than before: a three-storey, three-dimensional maze that has been given the name, ‘MultiPly’. The challenges here have been threefold: first to develop a system of load-bearing hardwood CLT panels and connections that is sufficiently strong and stable to support the large numbers of people likely to be traversing the installation at any one time; second, to deliver a structure that can be dismantled and re-used after the Festival; and third, to fabricate the entire installation in the UK. This last issue was perhaps the most problematic to resolve within the timescale available, given that - at the point of the project’s initial conception by Waugh Thistleton Architects and ARUP engineers - no capacity existed in this country to actually manufacture the innovative panels required. Fortunately, the Construction Scotland Innovation Centre (CSIC) opened towards the end of 2017 and was able to fill this void, its huge prototyping factory facility housing the first large-scale vacuum press for CLT production to be found anywhere in the UK.

As with the seven other innovation centres established by the Scottish Government to act as hubs between industry and academia, CSIC is able to draw upon the resources of the construction-related departments in 13 of Scotland’s universities. In this instance, the Centre for Offsite Construction and Innovative Structures (COCIS) within Edinburgh Napier University’s Institute for Sustainable Construction has carried out all of the necessary structural testing required. Industry too, has been involved in what is essentially a large-scale R&D demonstration project: Glenalmond Timber, a Perthshire-based company well versed in the development of innovative timber products and systems, has visually graded, sawn, planed and finger-jointed the raw material that was shipped over from America before delivering it to CSIC’s headquarters near Glasgow.

Very much a fast-track project, 102 Tulipwood cross laminated timber panels have been produced mid-June and mid-August, before transportation to Yorkshire for final fabrication by specialist manufacturer Stage One, the company that has successfully produced many of the summer pavilions assembled outside London’s Serpentine Gallery. This time the location will be the stunning Sackler Courtyard of the V&A Museum, to which the completed cubes will be delivered for onsite assembly and – finally - public access to this centrepiece of this year’s London Design Festival.

The project has already attracted substantial publicity and interest from construction professionals around the world as well as the engineered timber manufacturing sector, opening as it does, a whole new dimension and range of opportunities for advanced timber products to transform the way we conceive and construct a more sustainable built environment in the 21stcentury. From low value raw material to a high added value, circular economy construction product, this demountable assembly may well prove to be one of the seminal structures of the decade and certainly not one to be missed during September this year. 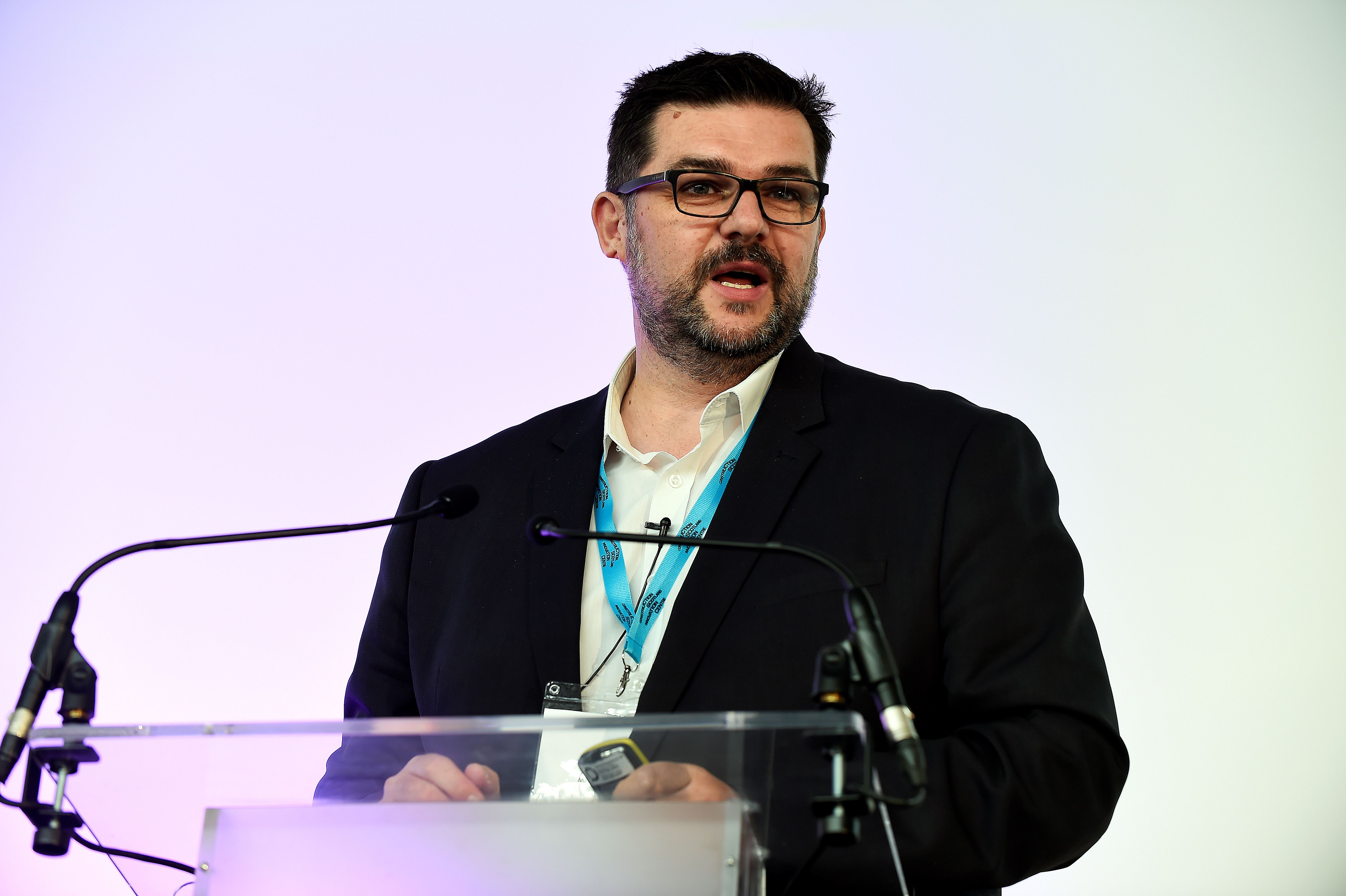 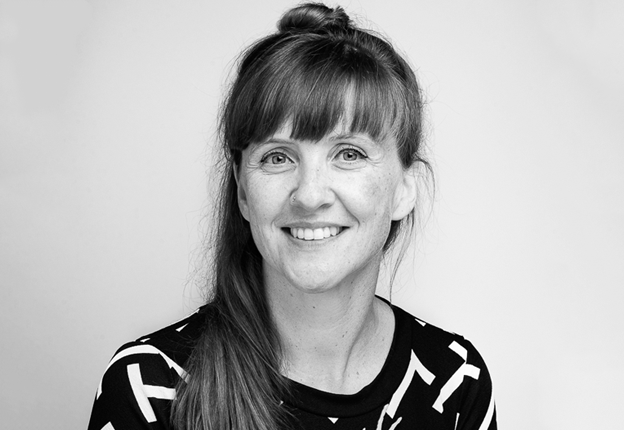 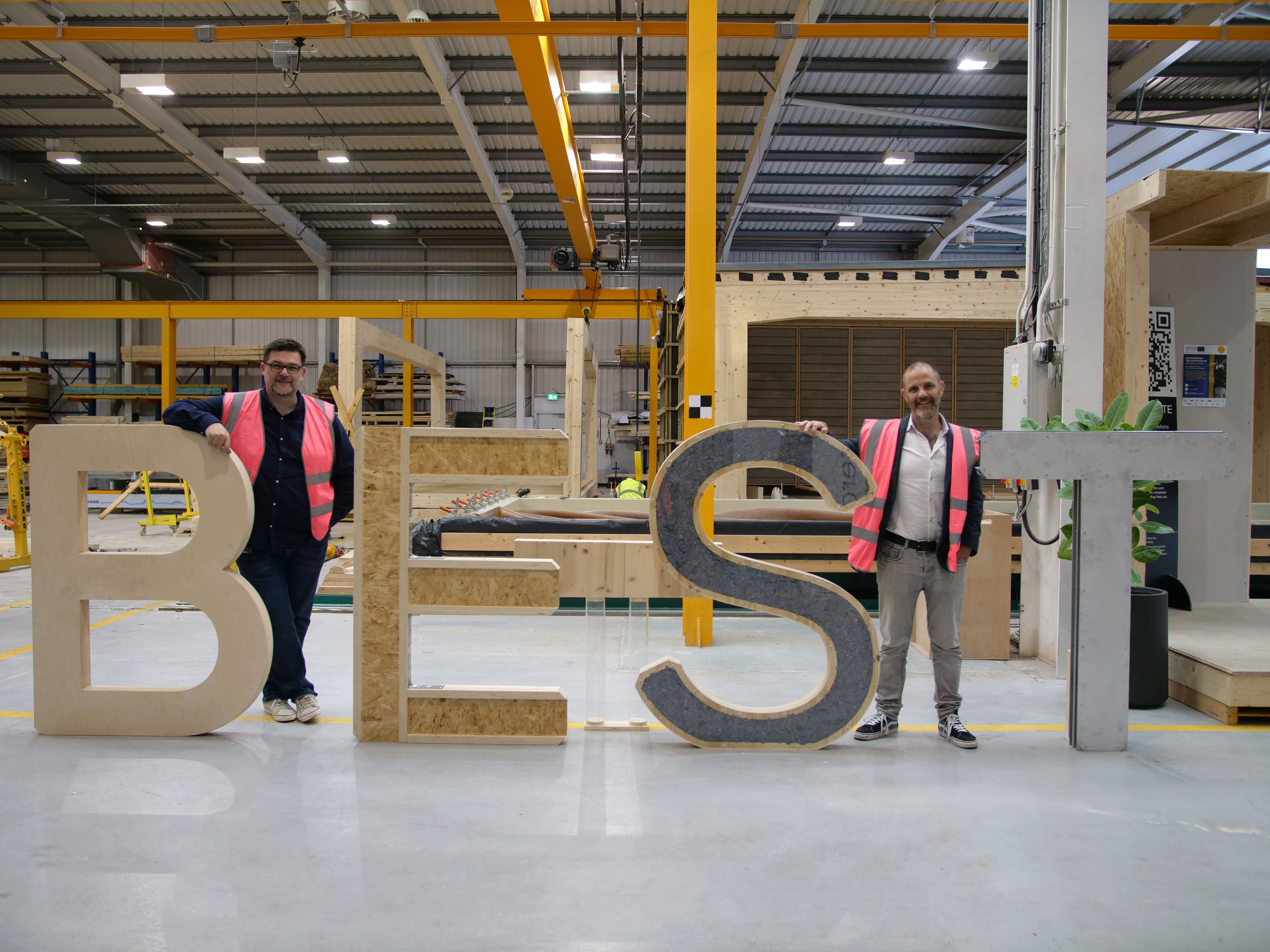 BE-ST and UKGBC Scotland team up on joint sustainability mission 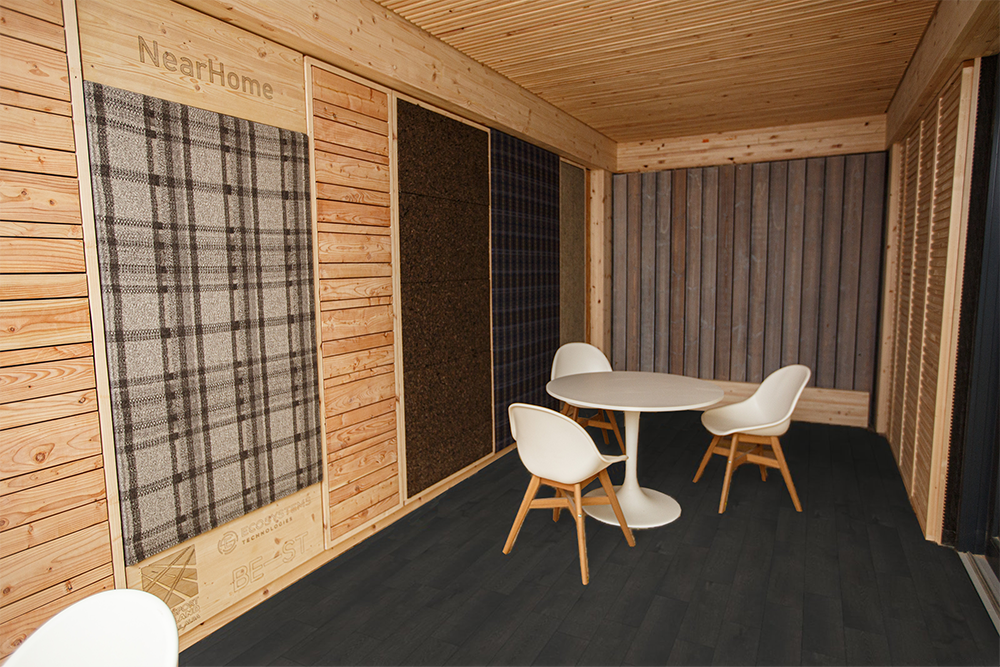